The Normandy Regional Government has funded a Chair of Excellence to support the development of new silicon-detector arrays focused on the study of exotic nuclei.

To better understand the nuclear interaction, the origin of elements and their abundances in the universe, it is of particular interest to investigate unstable or “exotic” nuclei  – i.e., systems with a large imbalance between the number of neutrons and protons.  The structure of such nuclei allows aspects of the interaction between nucleons, which are poorly known and which may play a major role during stellar nucleosynthesis, to be probed. To explore the structure of such nuclei, the nuclear structure group at LPC Caen employs nuclear reactions during which a neutron or proton is suddenly removed (“knockout”) or added (transfer) to such a nucleus without perturbing the other nucleons. These processes represent just a tiny fraction of all the possible reactions when a nucleus collides with a target but are directly sensitive to the microscopic organization of the neutrons and protons in the nucleus. Nucleon knockout and transfer require different experimental apparatus and accelerator facilities but provide very complementary information on the occupation of nuclear orbitals. The Chair of Excellence SIREN is central to the development of new silicon semi-conductor detectors for two international projects, each one focused on one of reactions mentioned. The overall goal is to greatly enhanced performances compared to existing setups in terms of granularity, compactness, efficiency and particle identification.

For the transfer of one or a few nucleons at low energy (~10 MeV/nucleon), it is necessary to be able to detect and identify a variety of light charged particles (p, d, t, 3He, 4He, 6Li, etc.) and measure their kinematical properties (energy, angle) with the best achievable precision. The GRIT project, which LPC is one of the principal contributors[1], is being designed and constructed in this context within an international collaboration with, as primary partners, IJCLab (IN2P3/CNRS, Orsay), LNL (INFN, Legnaro) and the University of Padova (INFN).  The SIREN project has two main goals related to GRIT:  (i) to develop the second detection stage of the trapezoidal silicon telescopes (Fig 1) of which there will be 12 units and (ii) to build a complete test bench at LPC including an acquisition system incorporating 32 digital electronics channels to determine the performances of each detector when received from the manufacturer. 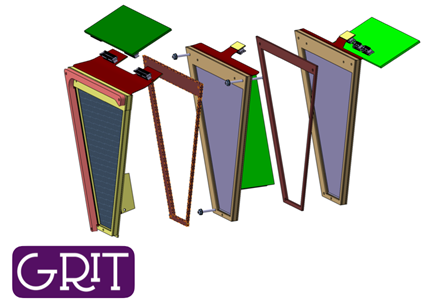 Exploded view of a trapezoidal silicon telescope for GRIT. The second stage (middle grey detector) is that which is being developed within the SIREN project.

For high-energy nucleon removal using, for example, the (p,2p) or (p,pn) knockout reactions (  t ~250 MeV/nucleon), it is necessary to detect high-energy protons which deposit  a small amount of energy in thin silicon tracking detectors.  Through the funding provided by the SIREN project the group is able to play a key role in the design and construction of an entirely new proton tracker for knockout reactions –  STRASSE (Fig. 2) – which will be installed at the RIBF-RIKEN facility in Saitima, Japan.  The system, which will be composed primarily by a two-layer “barrel” of silicon strip detectors, will enable the reaction vertex to be determined with a resolution of about 0.5 mm (full-width half maximum) – that is, about ten times better than existing setups. Such a precision is crucial to Doppler correct the energy of gamma-rays emitted by the nuclei produced in the knockout reactions and, as a result, determine without ambiguity the quantum state populated.  When used in coincidence with the CATANA (CsI) calorimeter, developed by our collaborators from the Tokyo Institute of Technology, it will also allow the so-called “missing mass” technique to be employed to determine the absolute energy of the state populated in the final nucleus with high efficiency and good resolution. To reach these goals, the inner hexagonal silicon barrel will be particularly compact (3 cm radius) and thin (200 um) to limit angular straggling between the two silicon layers. With the thicker (300 um) outer barrel, the tracker will comprise 17500 strips, each with a 200 um pitch, and a corresponding number of electronics readout channels. The two concentric barrels will form a system of 12-cm diameter which will be coupled with a liquid cryogenic target up to 15-cm long. This unique combination of a pure and thick target with a high resolution and efficiency silicon tracker will enable the study of the extremely exotic nuclei in a few days by compensating for the very low beam intensities (down to a few per minute). 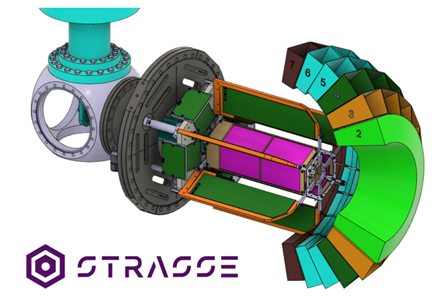 Design of STRASSE tracker (purple – outer barrel) with including the front-end electronics (green) and mechanical support structure. The cryogenic system for the liquid H2 target is at the left.  The silicon barrel is surrounded at forward angles by CsI scintillator crystals of the CATANA calorimeter (right).

Within an international collaboration involving TU-Darmstadt, the Tokyo Institute of Technology and RIBF-RIKEN, LPC Caen is in charge of the mechanical design and the full integration of the various systems (Fig.2). The SIREN grant provides financing for around one third (150 kEuros) of the cost of the tracker system’s construction (detectors, mechanical components and electronics).

The Normandy Region's RIN (Réseaux d'intérêts normands) Research program is designed to support research projects that must involve at least two partners from Normandy. The Region wishes to simplify the mechanisms to enable researchers to propose structuring projects, consistent with the strategy of institutions, organizations and the COMUE Normandie University. 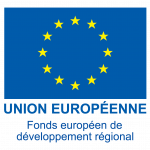