Since the dawn of time, man has been observing the sky, for fear, pleasure, to orient himself or to understand his environment. Until very recently, this observation of the Universe was essentially done thanks to photons over a very wide range of frequencies. These photons are neutral particles and are therefore not deviated by the magnetic fields that prevail in and between galaxies to the far reaches of the Universe. This advantage allows them to probe point objects in the Cosmos. Thus, many photographs and/or maps of the sky have been obtained in wavelength ranges from radio waves to gamma rays, passing through the optical domain or X-rays.

In recent years, two new and very promising messengers allow us to better understand the violent phenomena that govern the dynamics of the Cosmos and the early Universe. Gravitational waves, detected for the first time in September 2015, are one of these messengers, the second is the neutrino whose existence was postulated in 1930 and which was discovered experimentally in 1956. This particle, neutral and of very low mass compared to other particles, shares with the photon the property of not being deflected by intergalactic magnetic fields. The advantage of the neutrino over the photon is that it does not interact electromagnetically with matter, but only by weak interaction. This allows the neutrino to pass through gigantic quantities of matter (even dense matter) and to travel immense intergalactic distances without being disturbed. However, this advantage also turns out to be a disadvantage, because this very weak interaction with matter makes it very difficult to detect. To be able to detect some of these fleeting particles, it is necessary to build huge detectors or neutrino telescopes with a size of the order of km³. In the world, several international collaborations have embarked on this difficult and exciting adventure.

At LPC Caen, we are currently involved on the ORCA component of the experiment (Figure 1 below) which is particularly interested in the intrinsic properties of neutrinos of different flavors νe, νμ and ντ (associated with the charged leptons e–, muon μ– and tau τ–, respectively) and their oscillations: In the last decades, experiments have indeed shown that neutrinos can change their flavor (νe↔νμ, νe↔ντ, νμ↔ντ) while propagating in space. The oscillation probabilities of neutrinos to change from one flavor to another are described by the neutrino mixing matrix or PMNS matrix named after the initials of the researchers who introduced it. An important question remains open in particle physics: is this neutrino mixing matrix unitary or not? If the unitarity of this matrix were found to be wrong, it would contradict the predictions of the standard model of particle physics and would sign the existence of a new physics. Currently, the uncertainties on several elements of the PMNS matrix are too large to draw conclusions on its unitarity. This is mainly due to the low experimental statistics in the tau ντ neutrino sector. Several experimental projects, aim to increase this statistic in order to accurately determine the physical parameters related to this sector. The KM3NeT / ORCA experiment is part of this effort and will measure 4000 tau neutrinos per year in its final version. The data collection has started with the already installed detection lines and will intensify until the deployment of the 115 expected lines. 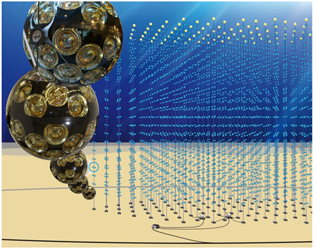 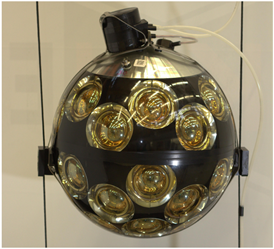 Eventually ORCA will consist of 115 detection lines spaced about 20 m apart and each comprising 18 spheres instrumented with 31 PMTs (see photo on the right) which are positioned every 9 m. The lines are maintained vertical with the help of a buoy attached to their end. This assembly forms a neutrino detector that measures the Čerenkov light emitted by charged particles resulting from the interaction of neutrinos with matter (earth’s core and mantle or sea water).