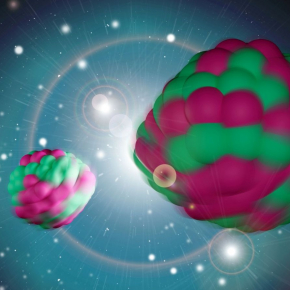 The international nu-Ball collaboration, working on the ALTO installation of the IJCLab laboratory, has brought new results shedding light on the way in which the fission fragments of an atomic nucleus spontaneously acquire a rotational motion on themselves: the angular momentum. This study, in which 6 laboratories of IN2P3 are involved, is published today in the journal Nature.

To address this question, the nu-Ball collaboration sought to clarify the precise moment at which angular momentum appeared in the fragments. If it was created during the deformation of the fissioning core or just after the breakup. In the first case, a coupling between the spins of the two fragments had to be observed. The absence of coupling, on the other hand, would argue for a delayed spinning. To measure this, the nu-Ball collaboration induced nuclear fission reactions with the Licorne pulsed neutron source and measured the gamma rays emitted during the experiment with the nu-Ball gamma detection set. The samples irradiated were uranium isotope 238U and thorium isotope 232Th. The experiments were conducted from February to June 2018 with more than 1200 cumulative beam hours with the tandem gas pedal.

The new data suggest that the angular momentum observed in the fission fragments is actually generated after the nucleus splits. As expected, the gamma-ray detectors observe that the average angular momentum of the fragments varies with their mass, following a sawtooth curve. But it also appears that the two fragments have distinct masses and a different mean spin.

"A rotation generated after fission"

Jonathan Wilson (IJCLab), spokesperson for the nu-Ball collaboration, says, “What really surprised me was the lack of significant dependence of the average spin observed in one fragment on the minimum spin required in the partner fragment. This observation discredits most theories that assume that angular momentum is generated before fission. Our results show that this rotation of the fragment on itself is generated after the fission. One could illustrate the phenomenon by a taut rubber band which would be suddenly released and would generate a rotational or torsional force”.

These new insights into the role of angular momentum in nuclear fission are important for the fundamental understanding and theoretical description of the fission process. They also have consequences in other research fields, such as the study of the structure of neutron-rich isotopes; the synthesis and stability of superheavy elements; but also in practical applications such as the problem of heating in nuclear reactors due to gamma-ray emission. The evaluation of the amount of gamma rays emitted during nuclear fission is crucial for the calculation of the heating effects.