In the vicinity of the neutron dripline, the final states are generally unbound and, as such, all in-flight decay products of the beam (charged quasiprojectiles, neutrons and, in some cases, gamma rays) must be detected and their pulses measured.  This allows the construction of the invariant mass (or relative energy) spectrum as well as other variables of interest, such as the relative neutron-neutron pulse.  The device used to perform these measurements at RIBF includes the SAMURAI magnetic spectrometer (7 Tm) coupled to the NEBULA multidetector made of plastic scintillators, which was completed in 2016-17 by the NeuLAND demonstrator.  If needed, the DALI2 (NaI) or CATANA (CsI) multidetectors are used for the detection of the de-excitation of excited states of quasi-projectiles. 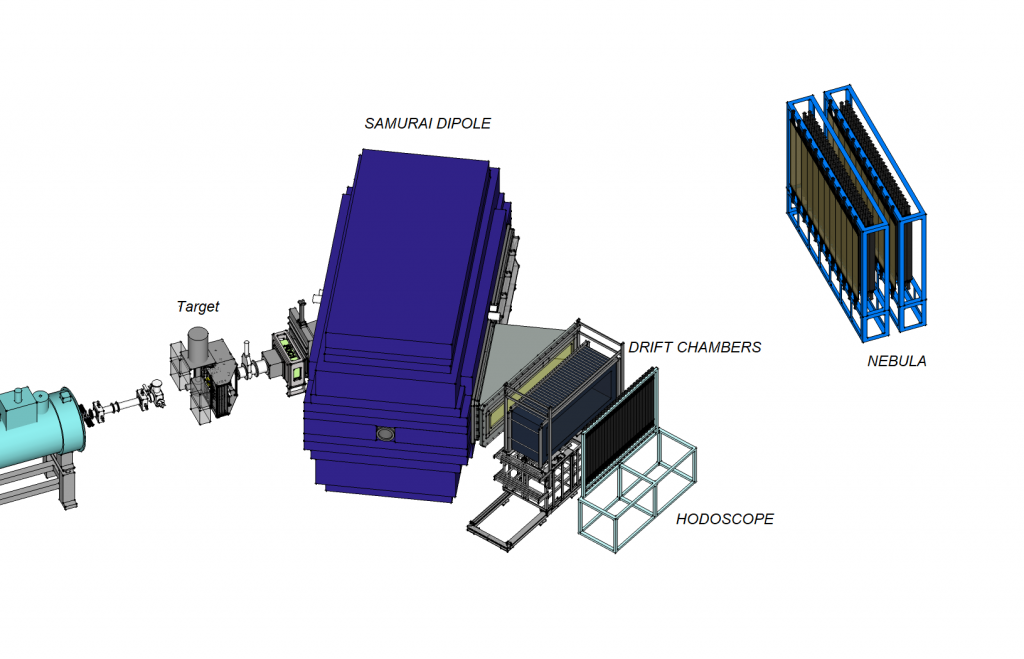 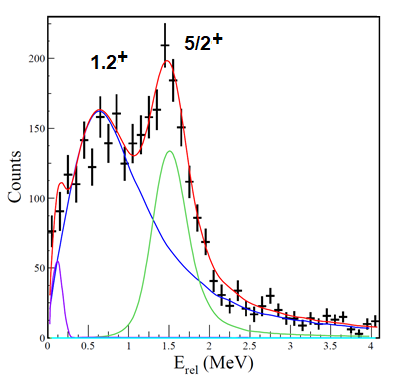 Spectroscopic study of unbound systems in the N=14-16 region

Using complementary proton and neutron knockout probes, 21C was identified for the first time and its low-energy structure was studied.  The most comprehensive spectroscopic studies to date have also been conducted on the unbound levels of 17,19C as well as on the unbound boron isotopes 16,18B.  Work on neutron-rich carbon isotopes confirms theoretical predictions of neutron orbital degeneracy s1/2 and d5/2 for Z=6.

First observation of 20,21B

As part of our program to explore the structure in the vicinity of N=14-16 below the doubly magical22,24O nuclei, the heaviest boron isotopes have been observed for the first time (Fig. 1).  Resonant states were observed for 20B, while data acquired for 21B indicate that it is a candidate for direct two-neutron decay.  Interestingly, all the structures observed in 20B via the invariant mass 19B+n are well above the 17B+3n decay threshold. 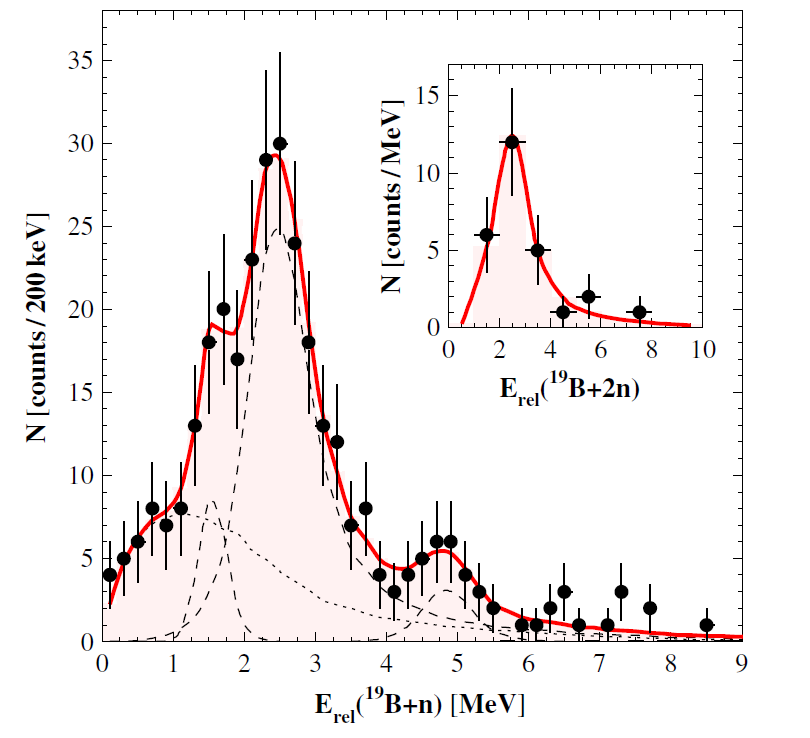 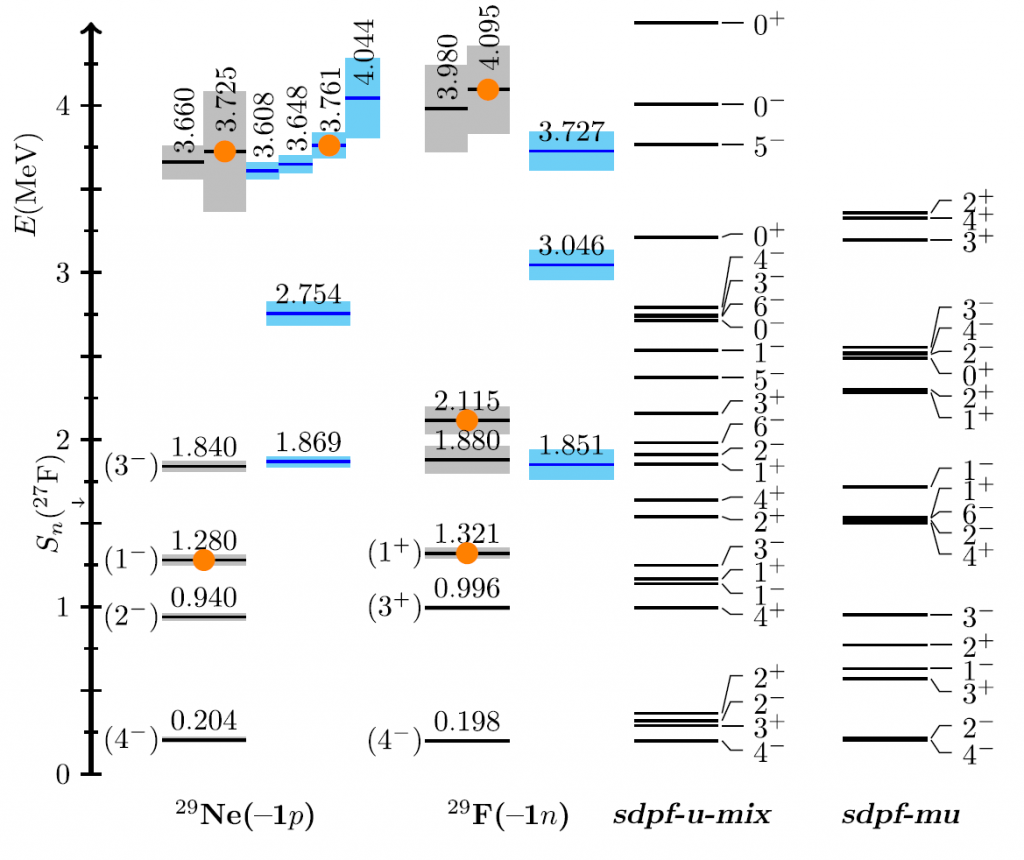 Structure of fluorine isotopes very rich in neutrons near N=20

Structure and decay of 16Be

This experiment took advantage of a high-intensity 17B secondary beam coupled to the MINOS liquid hydrogen target to produce 16Be via the knockout of a proton.  In addition to confirming a previous observation of the ground state of 16Be, the first excited state (2+) was observed for the first time.  Analysis of the 14Be+n+n events shows that the decay of both states is direct (no intermediate states in the 15Be appear to be powered).  Comparison with realistic three-body modeling of the ground state structure and decay shows reasonable agreement between theory and experiment and this suggests that valence neutrons exist primarily in a relatively compact “di-neutron” configuration. 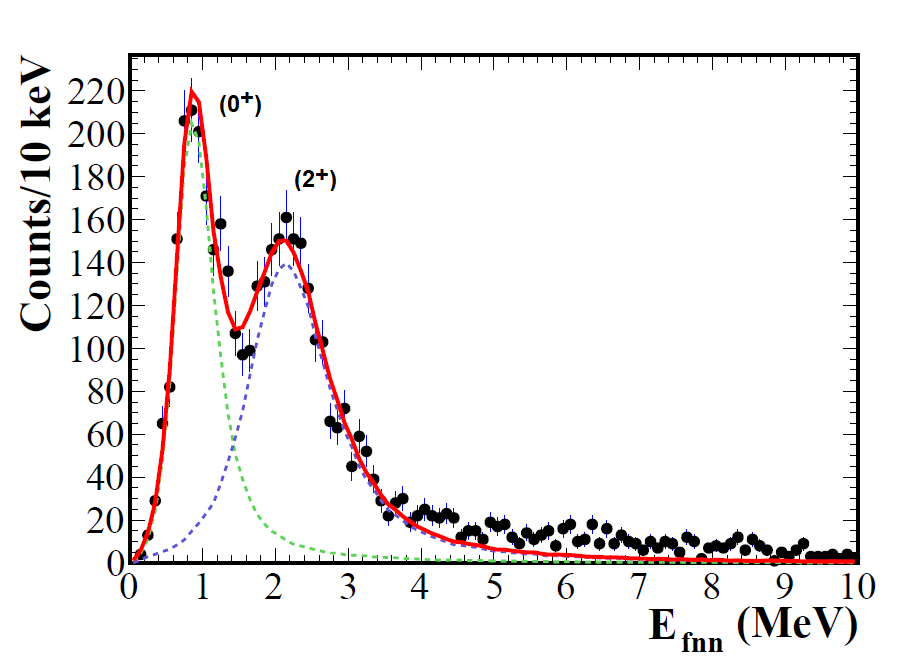