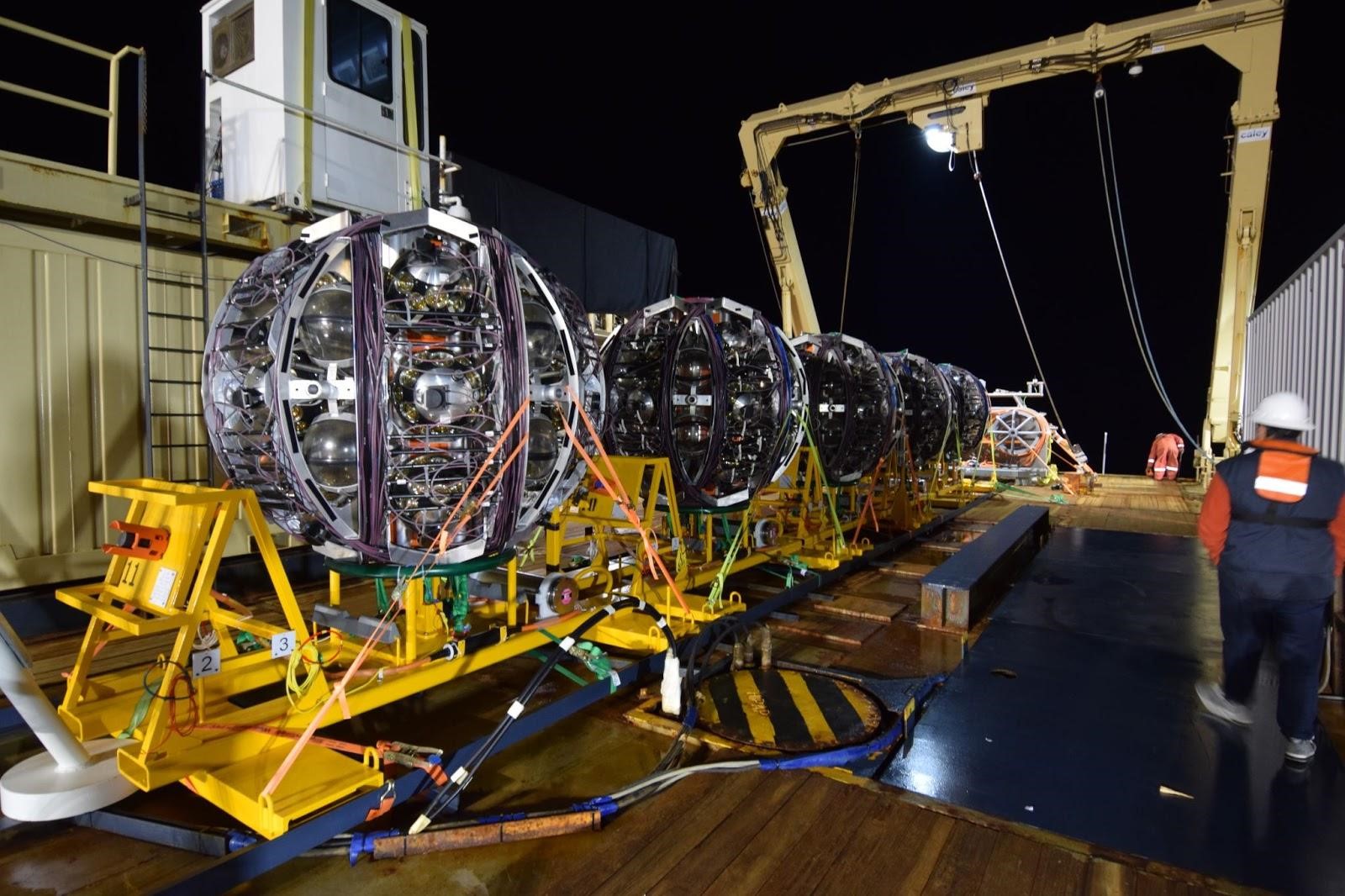 During a week-long at-sea campaign from April 8 to 14, 2021, the underwater infrastructure of the Italian KM3NeT site off Sicily was successfully implemented. In addition, five new KM3NeT / ARCA sensor units were connected and have since been operational.

Located in the Mediterranean Sea at a depth of 3500 m, about 80 km off Capo Passero, Sicily, the ARCA telescope and its sister telescope ORCA, located off Toulon, France, will allow scientists to identify astrophysical sources of high-energy cosmic neutrinos and to study the fundamental properties of the neutrino itself.

When completed, the KM3NeT/ARCA detector will form an array of more than 200 detector units. Each of these 700 m high structures consists of 18 modules equipped with ultra-sensitive light sensors that record the faint flashes of light generated by particles produced after neutrinos interact in the dark depths of the Mediterranean Sea.

During the first part of the offshore operation, a new junction box, a subsystem that provides power distribution and data transmission for the detection units, was added to the seabed infrastructure. The junction box is connected via an electro-optical cable to the coastal control station that was recently renovated as part of the activities of the Sicilian regional IDMAR project in Portopalo di Capo Passero.

In the second part of the operation, five new KM3NeT detector units were connected one by one to the junction box and deployed in their final vertical configuration, adding to a detector unit already deployed in the past.
“The success of this campaign is further proof of the technical quality of our developments, which are the result of collaboration with experts throughout Europe. It also demonstrates the growing capacity of our teams to produce the many detector units of this unique telescope, which will eventually cover a volume of several cubic kilometers, at several sites,” says Miles Lindsey Clark, research engineer at the APC laboratory, and technical leader of the project.
A total of six detector units are now in operation, representing the initial core of the KM3NeT/ARCA neutrino telescope. The technology used in ARCA was developed in the KM3NeT collaboration, which brings together 300 people worldwide. With the six ORCA detector units already taking data, the KM3NeT neutrino observatory now has a sensitivity comparable to that of its predecessor, the ANTARES neutrino telescope.

The KM3NeT neutrino telescope is an international collaboration involving 300 people from 58 institutes, including French teams from the APC laboratory, CPPM, IPHC, LPC-Caen, LUPM and Subatech. The project is selected in the framework of the European Strategy Forum on Research Infrastructures (ESFRI) roadmap.

ARCA-Astroparticle Research with Cosmics in the Abyss

ORCA-Oscillation Research with Cosmics in the Abyss