Nuclear physics is one of the themes of excellence of the Normandy region. This project proposes to study the equation of state of nuclear matter and in particular its asymmetry dependent component, the difference between the number of neutrons and protons, which is called symmetry energy.

The LPC Caen and the GANIL have joined forces once again to carry out an innovative research project.

The FIDNEOS project is part of the European FAZIA collaboration, and will strengthen the French part of the project, and in particular the Caen part, in order to increase its international visibility and maintain GANIL/SPIRAL2’s role as a major player in nuclear physics research.

This project proposes to study the equation of state of nuclear matter and in particular its asymmetry-dependent component, the difference between the number of neutrons and protons, which is called symmetry energy.
The knowledge of the equation of state of nuclear matter is one of the central questions of nuclear physics. It encompasses the fundamental properties of the nuclear medium which is present not only on earth but also in many astrophysical objects and phenomena. This knowledge plays an essential role in understanding and linking a multitude of data concerning different physical systems and processes, such as nuclei in laboratory experiments, in particular exotic nuclei, heavy ion collisions, the structure and evolution of compact objects in astrophysics such as neutron stars and supernovae.
In the supernova collapse the accretion of matter forms the central object called neutron protostar which cools down by a process of neutrino emission. Much of this process takes place at the surface, the neutrinosphere, which is composed of hot, low-density, neutron-rich matter. The presence of “clusters” and the “strength” of the symmetry energy influence the response of the neutrinosphere to the cooling process and thus the energy spectrum of neutrinos detected on Earth following a supernova event.
Heavy ion collisions are the only way to create high-density and low-density nuclear matter in clusters in the laboratory.
We plan to perform heavy ion collisions experiments with the FAZIA charged particle detector demonstrator (partially funded by SPIRAL2 Preparatory Phase, EU-FP7 Infrastructure/Project 212692) in the INDRA multi-detector reaction chamber which has been operating since 1993 at GANIL/SPIRAL2, Caen. This device will make it possible to detect and identify almost all the reaction products with a resolution (energy, angular, and isotopic) and an angular coverage unique in the world panorama of nuclear physics research.
The main issues are therefore the following:
(1) What is the equation of state of asymmetric nuclear matter?
(2) How does nuclear matter clustrize at low density?
Observables will be confronted with models to reject/confirm different theoretical predictions concerning the equation of state of nuclear matter. 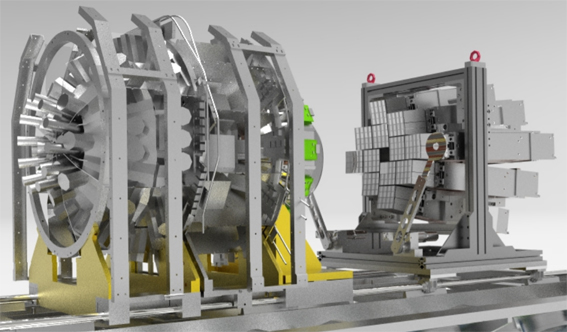 The project leader, former spokesperson for the national INDRA collaboration and the international FAZIA collaboration, see the CV attached to the dossier, is an expert in heavy ion collision physics.
The direct partners of the project are the INDRA/FAZIA groups of GANIL and LPC-Caen, whose quality was recognized by the HCERES (2015-2016 evaluation campaign, group B) with this judgment: “The team has a very high scientific quality. The production level is high (20% of the publications are in journals with impact parameter higher then 6) “.
The scientific project will be carried out in collaboration with theorists from GANIL and LPC-Caen for the interpretation of the data.

The Normandy Region's RIN (Réseaux d'intérêts normands) Research program is designed to support research projects that must involve at least two partners from Normandy. The Region wishes to simplify the mechanisms to enable researchers to propose structuring projects, consistent with the strategy of institutions, organizations and the COMUE Normandie University.

Equation of state of nuclear matter

Equation of state in the astrophysical context